Posted on February 25, 2017 by philosophami
EDIT: After I wrote this post, Google tweeted a statement clarifying why Natural News had been delisted. It had nothing to do with the content, rather they were using redirect techniques prohibited Google’s webmaster guidelines. Regardless of why Google delisted, my arguments still apply but should be interpreted as a policy going forward.

Here’s the dealy-yo. The Google just delisted Natural News (a purveyor of medical misinformation, pseudoscience, and science denialism) from its search results. Natural news is quite a popular website and often ends up in the first few search results on medical and health searches. This is no coincidence. The founder of the website/store is primarily trained in web design and search engine optimization. The problem is that most of the information on the site is extremely misleading–and that’s being nice about it. A sweet innocent googler, not knowing any better, could easily end up being mislead.

Let’s get one thing off the table. Delisting isn’t a violation of freedom of speech as it is described in the US Constitution. The First Amendment (second only in importance to the right of all Americans to own bazookas) concerns government restrictions on free speech–not private restrictions. Since the Google is a private company, the First Amendment does. not. apply.

Of course, as Dr. Steven Novella points out in his excellent blog post, things aren’t so simple. We can think of search engines like Google as public utilities. As such, perhaps we ought to be skeptical of excluding sites from results:

Google is by far the most popular portal to the web, which is now an invaluable general resource. Private utility companies are regulated by the government (or in some countries even nationalized) because they provide an essential service to the public. If Google is viewed as an essential utility, you can argue that they should not discriminate in this way.

The idea is that since Google has become somewhat of an essential service, we ought not exclude people or organizations from it perhaps in the same way we wouldn’t exclude unsavory business from a telephone book.

The Real All-Natural Truth!!11!!1
My own view is that it doesn’t matter two bits whether Google is considered to be a public utility or not. It’s beside the point. The purpose of a search engine is to provide information that is both accurate and relevant to the search terms. Natural News fails on both counts.
If someone wants to know how to treat a particular cancer, turmeric is not the answer. And if someone needs antibiotics, oregano oil is a poor choice. And, (this will shock you!!!!) coconut oil doesn’t provide relief from HIV or cancer. 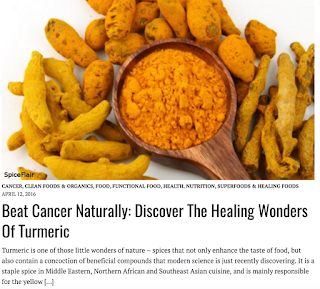 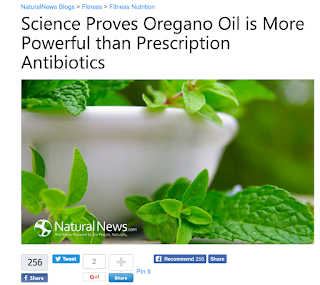 Now, I know what you’re thinking (I hope). How could anyone believe this stuff?
My sweet innocent child.
My little lamb.
That is precisely the problem. Famously, P.T. Barnum said that there’s a sucker born every minute. That was before the internet. In the internet age, that is a gross underestimation. For a variety of reasons people are remarkably credulous.
You might think, “Meh, so what? If people want to make stupid decisions, that’s on them. Health care freedom!!!11!!!1 U. S. A!  U. S. A!  U. S. A!”
Perhaps. But this doesn’t undermine my claim that NN fails to fulfill the criteria for being a relevant and accurate search result for the likely query. If I genuinely want to know how to address my health problem, a site that peddles misinformation (deliberately or not) should not show up in the results. It undermines the very purpose of making such a query in a search engine.
Furthermore, the harms of believing that coconut oil cures cancer are real. Here is a running list of what were avoidable deaths caused by belief in pseudoscience and misinformation of the kind peddled by NN. When people forgo science-based treatment for chelation therapy, faith healing, homeopathy people die unnecessarily.
The Real Problem
But wait! There’s more! All this is small potatoes to the real problem. A liberal democracy is committed to the idea that policy ought to be justifiable, in some sense, to everyone subject to it. Contemporary liberal democracies are, by definition, replete with diverse ideas about what we ought to value and the ordering of those values. These disagreements aren’t going away any time soon.
Agreeing on how we ought to address particular public health problems is difficult enough when there is disagreement over values and their relative priority. When you add in disagreement over basic scientific facts, any hope of agreement evaporates.
And this is precisely the problem with sites like NN. They deliberately mislead people with regard to the basic science on issues such as vaccines, cancer treatment, water fluoridation, and more. They also undermine trust in epistemic authorities by publishing inflammatory and misleading “exposees”. In effect, they undermine the capacity for science-based public health care policy.
When you tell people that vaccines cause autism or that vaccines are part of a depopulation plot by the Illuminati-Rothchild elite, they won’t sign on unless you coerce them. And coercion is something we try to avoid in democracies. The problem is that people who read NN only have to be coerced because NN misrepresents the science. I’m not going to go into it here but, no, vaccines do not cause autism. And no, vaccines are not part of a world depopulation scheme by some shadowy world government.
Check out articles on http://sciencebasedmedicine.org/ or http://scienceblogs.com/insolence/ if you’re a fence-sitter and are interested in hearing what medical researchers have to say.
Let the People Decide!
At this point you might say something like we should “let the people decide” or “the solution to misinformation isn’t censorship (which this isn’t, anyway), it’s critical thinking.”
Oh! My sweet babe!
My pure unsullied child!
You think the average person can detect bullshit? How quaint! You are the well from which hope springs. Let me drain that well with–what else?–statistics about the general public in the US.

That’s not the standard one should be aiming for. 70 percent of Americans cannot read and understand the science section of the New York Times. Approximately 28 percent of American adults currently qualify as scientifically literate (Source).

Add to the above these statistics on health care literacy:

Only 12 percent of adults have Proficient health literacy, according to the National Assessment of Adult Literacy. In other words, nearly nine out of ten adults may lack the skills needed to manage their health and prevent disease. Fourteen percent of adults (30 million people) have Below Basic health literacy. These adults were more likely to report their health as poor (42 percent) and are more likely to lack health insurance (28 percent) than adults with Proficient health literacy. (Source: Kirsch IS, Jungeblut A, Jenkins L, Kolstad A. 1993. Adult Literacy in America: A First Look at the Results of the National Adult Literacy Survey (NALS). Washington, DC: National Center for Education Statistics, U.S. Department of Education.)

All this to say: Yes, in an ideal world we could let people’s critical thinking sort things out but this is wildly unrealistic given the educational deficit in the general population. Worse yet, is that those who are most vulnerable are most likely to be duped by false claims since they are most likely to not have received a good education:
When a policy, institution, or practice disproportionately adversely affects the most vulnerable members of society there are good reasons to make changes such that they don’t suffer these effects. Currently, search engines make it all-too-easy for unwitting people to be mislead and they are often the ones who can least afford to waste money on ineffective treatments.
There’s a strange irony here. The lower the general level of critical thinking and education the more people will probably yell and scream about how such screening amounts to a violation of freedum. However, such populations are the ones most in need of screening results.

Conversely, the higher the level of reasoning and education, the less such screening policies will matter. Such people already have the critical reasoning capacities to dismiss sites like NN as the steaming mound of manure that they are. In such populations, NN will drop out of the search results on their own. No one will go there aside critical thinking instructors like myself who use the site as a valuable source of case studies in reasoning errors.

One last possible objection to delisting such sites: From the perspective of True Believers, delisting only lends credence to their claims that such sites are dispensing information that THEY don’t want you to know about.
To this I say, we aren’t concerned with the True Believers. They are impervious to reason and evidence. They’re a lost cause. If you don’t believe me, spend a few minutes in the comments section of one of their articles. You’ll have as much luck changing their mind as you will converting Alex Jones to Islam.
Our policies concern those that are genuinely looking for accurate information who have yet to completely fall prey to systematic misinformation. If NN and similar sites don’t come up in a search, the innocent Googler is better off and they lose nothing. Besides, all they wanted to know was how to treat a particular medical condition. They didn’t want to get pulled into some grand conspiracy about Big Pharma in conjunction with Bill Gates poisoning their children and that the True cure to what-ails-them is colloidal silver or powdered twigs from the Himalayan foothills (all conveniently available for purchase on the site).
The lost causes who have already been sucked into the epistemic black hole of conspiracism can hoot an holler all they want about “censorship.” Nothing is stopping them from typing in the web address of their favorite crank website to get their daily dose of misinformation. Delisting doesn’t make NN and similar site inaccessible. It just prevents the further spread of misinformation into the public domain. And this is a massive public good.

Yeah but Slippery Slope
Some people might worry that having someone else determine which sites come up in our search is somehow how bad or is a slippery slope to objectionable censorship.

A) No matter what (including now), decisions have to be made regarding the ordering of websites in response to search terms. There is no neutral ordering unless Google’s algorithm is a results randomizer. Popularity isn’t necessarily a good one either. I’m going to be wildly controversial and say accuracy ought to be the primary ordering criteria of search results.

B) Yeah but who determines what’s accurate?
(1) An algorithm can give/remove points based on the credentials of the people running the site.
(2) For some domains of knowledge there won’t necessarily be a consensus but where there is, use that as a standard. To the degree that a website deviates from that standard, to that degree they get points.
Conclusion
Let me conclude with one of my favorite recent quotes:

“We live in a world of radical ignorance, and the marvel is that any kind of truth cuts through the noise.” Robert Proctor, science historian.

Agreement on public health care policy is difficult enough as it is. But when large segments of the population believe wild conspiracies about the CDC, vaccines, and the efficacy of various treatments, democratic policy-making becomes all-but-impossible. To function, a democracy needs trust in our experts and institutions, and possess a shared set of facts from which to work. Sites like NN unjustifiably undermine each of these critical elements with outright false claims, innuendo, and distortion.
If we value what’s left of our diminishing ability to form effective and mutually justifiable public policy, search engines like Google should–nay! MUST!–diminish the visibility of those sites that contribute to the radical ignorance of the world we currently inhabit. Democracy itself is at stake.

6 thoughts on “Democracy and Free Speech in the Age of Ignorance: Google Delists Natural News from Search Results”